Rebecca’s parents were born to very different families. One wealthy, one all but destitute, they were united only by their striking mutual beauty. But the sole child to bless their great romantic fairy tale is a daughter of startling ugliness.

The shock of having given birth to such a monster leads the mother to withdraw both herself and her daughter from the world. Only by keeping her child indoors, away from strangers’ eyes, can she protect her from their disgust.

But against all odds, with a little help from some remarkable friends, Rebecca discovers a talent for music that proves that inner beauty can outshine any other.

A Life Apart is an irresistible modern fable that will resonate with anyone who has ever felt that they don’t belong.

An ugly woman has no vantage point from which to tell her story,” announces Rebecca, the sympathetic, intellectual narrator of this subtle, impressively candid Calvino Prize-winning first novel from Italy. In describing her tale as one “told from the corner in which life had pushed us, through the crack left open by fear and shame”, leaving just enough “for us to breathe, just enough for us not to die”, Rebecca stresses that she is “really ugly”. Although often noting her ugliness, she seldom complains; her tone instead is factual and politely detached, though with less authorial irony than might be expected.

A suggestion of the traditional fairytale shrouds the plot. Rebecca is the daughter of beautiful parents: her gynaecologist father is black-eyed and handsome, her mother lovely. Their great romance – which brought together the doctor as a prince, the poor peasant girl as a princess, despite the opposition of her parents – is doomed. Both families have had medical tragedies, but the doctor concealed his. Therein lies the curse, the “taint”. Rebecca’s entry into the world forces her mother to abandon ordinary existence. Instead she sits in a darkened room overlooking the river. The lovingly decorated palazzo she had restored in various shades of blue and pale yellow for her husband and baby becomes an imprisoning tower.

Rebecca recalls how her mother had taken to wearing mourning dress soon after her birth. Elsewhere there is a reference to the dwarf princess and the dramatic fate of her dwarf minders. More mundane is the experience of the long procession of childminders interviewed to tend Rebecca. Few of them prove suitable and one, who stayed briefly, left, remarking: “There is too much sorrow in this house.”

The distracted father, persistently conversing with his wife who no longer speaks, does manage to secure help in the despairing form of Maddalena, a woman who has lost her two sons and her husband in an accident. Maddalena weeps all the time; it is a narrative device that Veladiano uses far too often. Yet this is a minor quibble.

Frequent visits to this grieving household are made by the glamorous and forceful Erminia, the twin sister of Rebecca’s father. Erminia is a musician whose career has been stifled because her talent never quite matched her striking appearance. She is theatrical and given to opinionated statements, an ambivalent combination of fairy godmother and gorgeous wicked witch. Men pursue her, but none linger, and she appears far too interested in her brother to care. She does detect that Rebecca has a gift for music, but the child’s mother refuses to allow her daughter to attend school. When Rebecca ventures out at all, it is only by night, wearing a hat and scarf.

Eventually the narrator wins the chance to go to school. Her father weakens and is unable to bring her, so she is accompanied on her momentous first day by Maddalena. The teacher, Miss Albertina, places her beside “a blonde, fair-skinned, hugely fat girl” who whispers that her name is “Lu-cil-la”. This child, the teacher’s niece, also has problems in that she and her mother are desperately poor because Lucilla’s father has run off with a young girl. Rebecca is delighted to have found a friend.

The ongoing tragedy of the mother reaches its climax. Erminia moves in and declares her intention to redecorate the house. “We could start with the colours: they’re too faint. It feels like living inside a box of stale candy. In the long run, colours like this make people weak.”

By  Eileen Battersby
from IrishTime 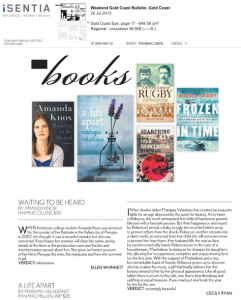 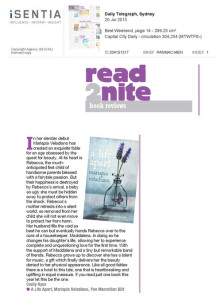